Foundations for the Transformation

In 1913, Pharmacy became the first health professional academic program to be established in the University of Puerto Rico, Río Piedras Campus, only 10 years after its foundation.  Commitment to the collection, care and exhibition of pharmacy artifacts was formally introduced by the faculty’s second Dean, Dr. Luis Torres Díaz.  Also a pharmacy historian, in 1947 Dr. Torres had the vision to acquire a significant collection, add it to his own, and persuade the university authorities to establish the Museum of Pharmacy in 1954, the first museum of the history of a health profession in Puerto Rico.  After the College of Pharmacy, as it was then known,  moved to the Medical Sciences Campus, the Museum of Pharmacy reopened in 1984, was named in honor of its founder, and continued to support research and education related to the evolution of pharmacy practice in the island. 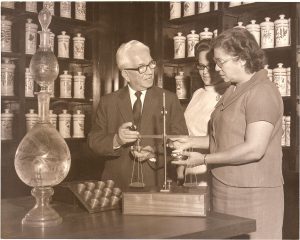 The Medicinal Plants Garden as a Living Museum

The School of Pharmacy’s long commitment to the collection of medicinal plants can be traced to the initiative of the establishment in 1936 of the original medicinal plants garden at the Río Piedras Campus, led by another distinguished faculty member, Dr. Esteban Núñez Meléndez. At the time, most of the remedies used in Puerto Rico and provided in pharmacies were prepared by the pharmacist using raw botanical drugs. In 1948-49 the garden was relocated to the UPR Botanical Garden, while remaining under the administrative and academic structure of the College of Pharmacy. The garden continued to support educational and research activities, leading to the isolation of a new alkaloid, development of a herbarium, and publication of several books on medicinal and poisonous plants, as well as pharmacognosy textbooks by Dr. Núñez, and to the publication of research articles and book chapters by other researchers. After being severely affected by hurricanes, changes of director and staff, at the turn of the century a campaign was initiated to rehabilitate the garden, which led to the construction of a pavilion in site, with space for office, storage and holding workshops, presentations and meetings.

The museum staff assumed the custody of the Dr. Núñez herbarium collection, and when the pavilion at the Medicinal Plants Gardens was finally finished late in February 2009, directed the efforts to rename the garden in his honor. Through donations and acquisitions, the number of different species planted in the garden was more than triplicated, and the total number of specimens in the collection was increased to more than five times what it was before. A formal reopening and redenomination ceremony of the garden took place on May 28, 2009. 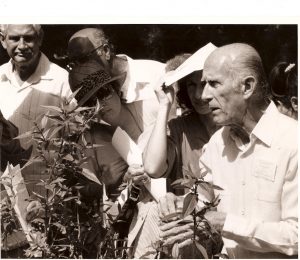